The herd of reindeer appeared over the rise of the hill. A great mass of animals painted a patchwork of brown and white on the green and grey of the high scrub. A low chorus of grunts and lowing carried over the ground, accompanied by a rumbling percussion of hooves. Coming up behind them were a line of quad bikes and a pair of collie dogs. The herd packed closer together, and became a single shifting mass flowing across the ground. One of the quad bikes broke off and turned towards us, bouncing its way over the tussocks. We started to back off, not wanting to disturb this monumental round-up. But as one bike got a little closer, its rider started beckoning us towards him. We were about to become reindeer herders.

My girlfriend and I had been walking for over a week. We had started in Abisko, about 200 kilometres north of the Arctic Circle, and were heading for Kvikkjokk, two weeks south. It is a magnificent route through one of Europe’s last wildernesses: glacial landscapes of beautiful desolation, icy limpid lakes, eerie forests where the upturned trees might just bear the marks of troll claws. Our venture may sound intrepid, but it wasn’t terribly. The Kungsleden – the King’s Way – is a well-used hiking trail with strategically placed huts every 15 to 22 kilometres. These have simple bunks, wood-burning heaters, gas to cook on and basic supply stores. Water comes by the bucket from the local stream and there’s no electricity, but it was mid-summer and the sun didn’t set. Even at midnight, a thin, cold light seeped from behind the mountains.

Reindeer pepper the walk: mainly small family groups of does and calves, but with the occasional proud, solitary stag silhouetted on a hill as if auditioning for a whisky advert. At one mountain pass, a small herd split around us as they were driven through by their Sami herders. The Sami have been herding the animals for centuries, ranging across their homeland, which stretches over Norway, Sweden, Finland and Russia. These days only around 2800 (10 percent) Sami people are engaged in reindeer herding, and their nomadic way of life has been largely replaced by a semi-nomadic cycle through the year as they move their herds between grazing grounds. But they still live across the porous mountain borders with their own languages and culture, and their stateless life has put them at odds with the governments of the regions. That the State Institute for Racial Biology in Uppsala was forcibly sterilising Sami women until 1975 gives something of the bitter flavour of the linguistic, religious and racial discrimination and abuse they have suffered. Even now, despite better recognition of their culture, they continue to experience threats to their way of life and environment.

In the area we were walking through, the reindeer are rounded up twice a year: all the animals from across huge tracks of arctic hillside are corralled together. The first round-up of the year is in the summer, when the young calves have their ears marked to identify the males and females and to which Sami family they belong. The second is in the autumn when young stags are taken for their meat. After that the herds are driven south, away from the high hills and the worst of the weather. We had heard about this from the hut warden at Tjäktja Pass, the highest point of the walk. A warden for the last ten summers, he had only recently encountered his first round-up, so we didn’t expect to experience one. But when we arrived at Sitojaure we learned from the hut warden there, herself Sami, that she and her family were due to take part in one that very night on the hills across the lake. She offered to wake us when she got the call, which could come at any time. Exhausted from the day’s walk, I should have slept, but instead I lay wide awake in anticipation, waiting for the call – which never came.

The next morning we took a little motorboat across the choppy lake and started our walk up through the light forest that rings the high, bare hills. The spaces between trees were busy with skittish reindeer, evidently on the run. Then a low growling sound, and a quad bike appeared with a solid man in his fifties astride. He smiled, his broad, dark face creasing like a great piece of leather, and he told us that they were starting the round-up and we might see itfrom the top. So we climbed, until on the crest of a hill we spied a ring of fences. This corral – called a rengard – was to be the reindeer’s destination.

So we waited, scanning the horizon. Occasionally we saw a small group of reindeer, sometimes heard the buzz of a quad bike or trail bike, but no great round-up. It got colder and still we waited. We waited some more. We worried that the round-up might be leading to a different rengard on the other side of the hill, so we scouted around. There was no sign of activity. The cold was really starting to bite, and we were on the verge of giving up for the warmth of the next hut.

Then the herd appeared: that great grunting, lowing, rumbling mass. Hundreds on hundreds of them pouring into view, like so many extras in a reindeer epic. And with the herd was the beckoning Sami. It was the man from the forest. The game was afoot. And ahoof. 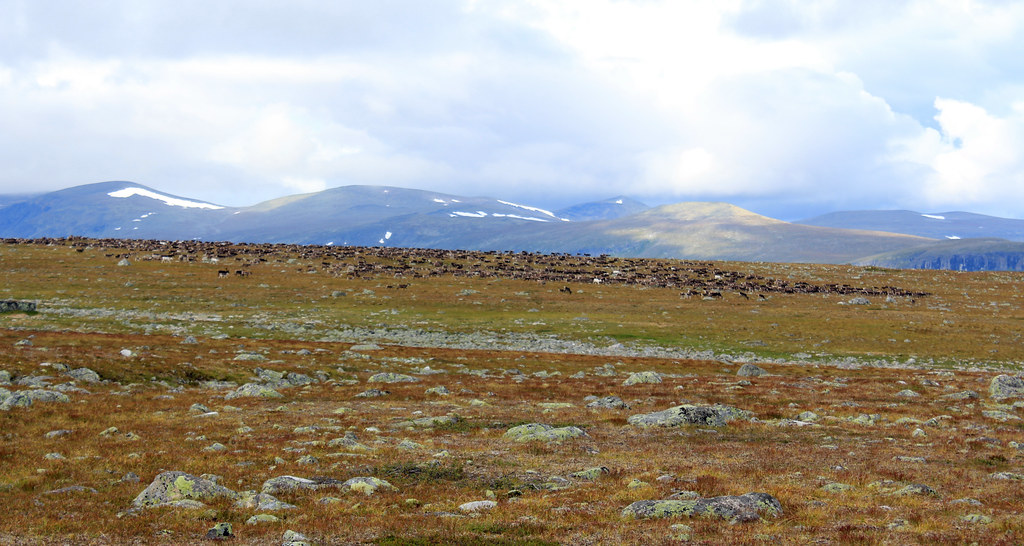 The Sami reached us and pointed very firmly to spots on the hillside where we should stand, about fifty feet away from each other. We assumed that we should stay put and not interfere. They had clearly been at the enterprise for hours, pulling each cluster of deer together into this massive herd, and the last thing we wanted to do was to send the animals scattering. Then, as the herd disappeared behind a brow of the hill, re-emerging to our right, other Sami started to line up alongside us. We could see now: we were part of the cordon designed to block and guide the herd up towards the rengard. The animals would sweep toward us, come up against our line and be turned away into the rengard. As the throng of hooves and antlers neared, the Sami signalled us forwards. The trap was closing in. At first we followed the Sami’s lead at a steady walk, but then a sudden beckoning and we were running. And I was wishing I had found a moment earlier to put down my heavy pack. 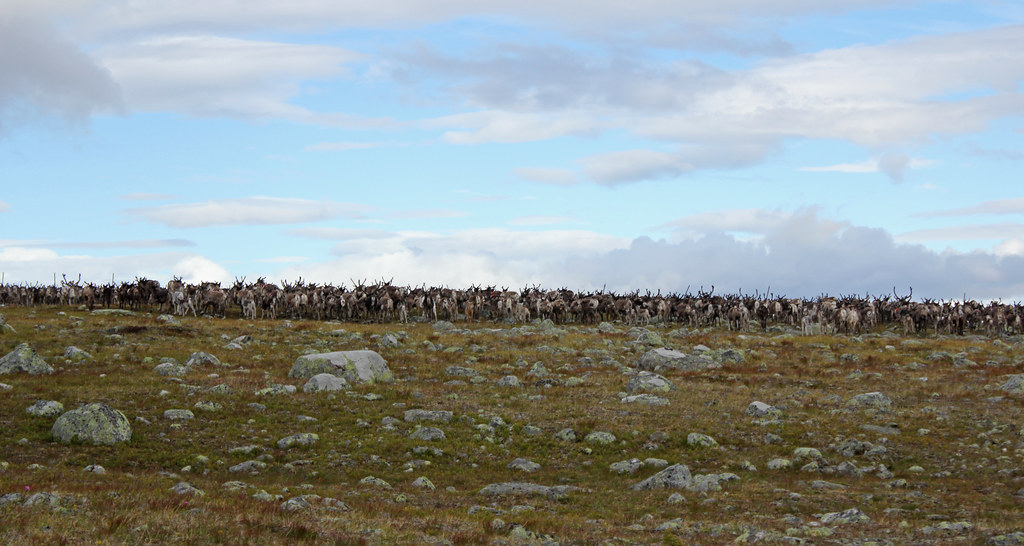 Initially the reindeer were compliant. They lowed and they stamped and bustled nervously against each other, but they kept on going. Then, as we got them on to one side of a long funnel of fencing that ran toward the centre of the rengard, it was as if a thought struck them all at once, a realisation of their fate. The herd turned. The reindeer were now heading straight for us. It’s hard to describe the feeling you get when a solid line of six-foot-high antlers is advancing on you and all you have to defend yourself with is a woolly hat. (The Sami, it should be said, were still on or next to their bikes.) The only defence available, as signalled by the herders, was to wave our arms frantically above our heads. But with half a dozen of us and several hundred of them bearing down on us, I wasn’t convinced. Luckily reindeer seem to be bad at weighing odds and the arm-waving did the trick: the herd turned back and cantered anxiously into the circle of fences.

Within seconds of getting the reindeer into the rengard, the Sami had closed up the fence, trapping the animals. But rather than stopping in their new prison, a strange motion started to develop in the herd: first it seemed just an uncoordinated rush to the far fences, but then it became apparent that they were working themselves into a circular motion. Within their new prison, they went round and round at a gallop, lowing frantically. It looked at first like a sort of insanity, but it is actually a canny adaptive defence mechanism: if you were a wolf in search of a juicy calf, you would think twice about diving into this maelstrom of hooves and antlers.

For the Sami it was time for a rest, and we were glad to be able to put down our packs. We were told to stay by the fence, and they wandered a little way up the hill for their lunch. A helicopter arrived, out of which spilt more Sami, with food and crates of beer. It is striking that this traditional practice is being preserved by helicopters and quad bikes when no one else is allowed to cross these hills with more than a pair of walking boots or skis, but the Sami have earned a bit of leeway. And these Sami, up since yesterday scouring the hills for every last one of their animals, had certainly earned their beer. 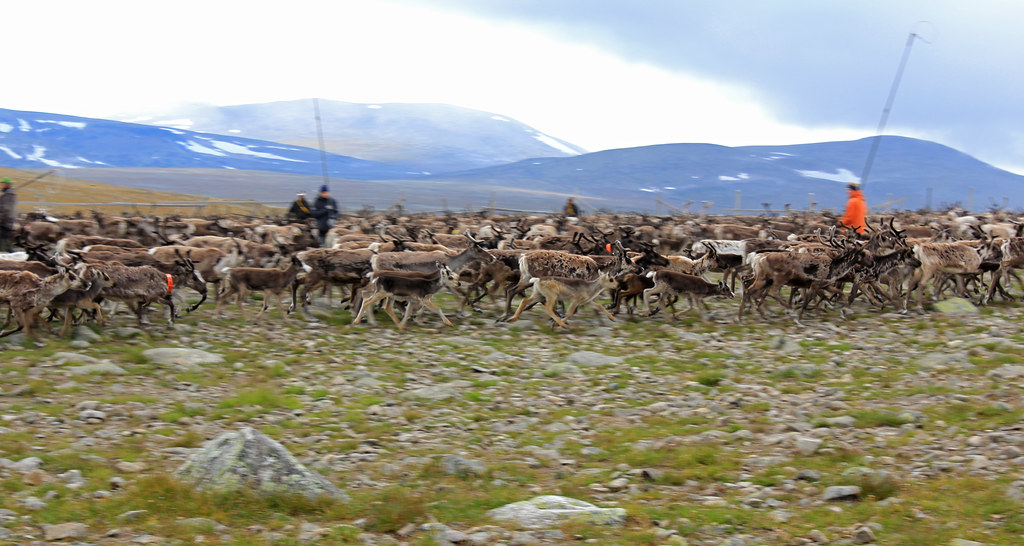 Meanwhile, the reindeer circled, round and round, slowing eventually to a steady plod as if they felt the threat had passed. But it was not over for them. The final stage was about to begin. Several of the Sami advanced into the ring brandishing long poles with wire loops at the end – like fishing nets without the netting. Somehow they made their way through the mass into the middle of the reindeer centrifuge. There they waited, watching for their moment.

And then the poles were down, plunged into the herd. A commotion of lowing and the circle split for a moment. A calf was caught by a back leg. The herder pulled it in towards him, knelt either side of it, marked the ear, and then the calf was away. 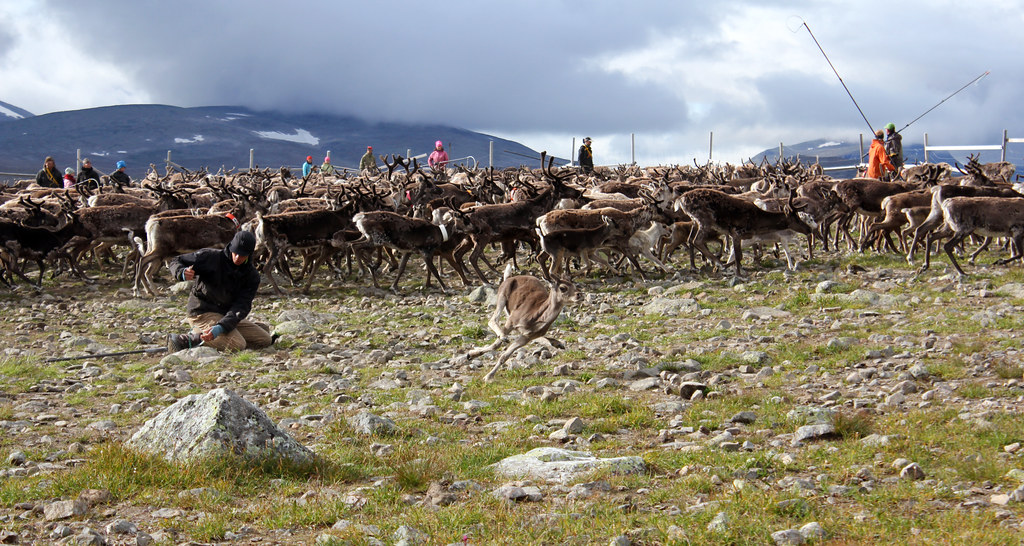 A calf escapes after tagging.

For some time this went on, each calf fished out, marked and released. Male or female – deciding meat or mercy in the next round-up. By this point, we were reduced to spectators. I suspect we had been little more during the round-up – after all there’s little doubt they would have managed just fine had we not been there . But it felt like enormous luck to have been on the right piece of hillside on the right day of the year, and an honour to have taken part. A few days before this encounter I had eaten reindeer at the mountain station at Saltoluokta. Maybe it was the effect of having spent a week eating soggy pasta and tinned tuna, but the meat was delicious – dark, lean, rich and tender. I now felt as if retrospectively I had done a little more to earn that steak. Strange thing, carnivory.

We didn’t stay for them to finish their job tagging the calves and release the herd back into the wild – it would take many more hours. We walked on to the huts at Aktse, each step now reminding me that running after reindeer over rough ground with a 14kg pack is not very good for the back. The next day we were back up on that same hillside on the way to climb the thornlike peak of Skierfe. The rengard was empty and silent. The few solitary reindeer, free once more to roam the hills, kept their wary distance.