We’ve all had the sensation of seeing a film adaptation of a favourite book and thinking that the characters aren’t being portrayed as we’ve always imagined them; that the story isn’t being told properly. For the authors who first wrote the words the sensation must be much stronger and stranger, and there have been adaptations both loved and loathed by their original creators. The difference for writers is that they get the chance to respond in their own writing.

I started to think about this again recently as I came to the end of my sequential read-through – interspersed with plenty of other more nutritious reading – of the original Ian Fleming Bond books. I’d read a couple before out of sequence, but it’s fun watching Bond change and yet stay the same across a decade of stories. He never stops being a snob, a sadomasochist, a misogynist, a xenophobe, a homophobe: as Blofeld calls him, “common thug, a blunt instrument wielded by dolts in high places”. And until things start to fall apart for him towards the end of the series, he rarely displays the levels of character complexity that he does in his debut Casino Royale.

END_OF_DOCUMENT_TOKEN_TO_BE_REPLACED 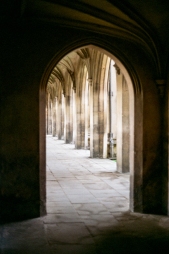 “A narrative is like a room on whose walls a number of false doors have been painted; while within the narrative, we have many apparent choices of exit, but when the author leads us to one particular door, we know it is the right one because it opens.” – John Updike

So, the notes are back from my editor and I’m embarking on the final (this time I mean it) rewrite of my novel. It’s had its fair share of revisions in its life: characters have come and gone and the ending has changed more than once. Usually each change feels more right than it did before, but sometimes I dig up an old draft and feel I’ve lost something along the way. With all the changes that a book goes through, how can a writer be sure that they are opening the right doors?